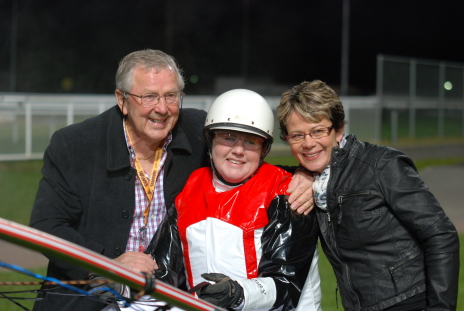 TALENTED three-year-old pacer Hugo Play gave his trainer-driver Kate McLeod her biggest win when he powered his way to an effortless victory in the $30,000 Roberts Equine Supplies Globe Derby Stakes final over 2200 metres in Launceston on Sunday night.

Hugo Play went into the final a short-price favourite and at no stage did he give his backers cause for alarm.

Ciskei (Gareth Rattray) led while McLeod eased Hugo Play out of the early action from his wide front-row draw.

But when McLeod sent her charge around the field to make a bid for the lead Rattray was quick to hand up and from there on McLeod stole a couple of easy quarters (400m) and the gelding had no trouble staving off all challenges in the home straight.

Hugo Play has been with McLeod for this preparation and the Globe Derby win took his record to three wins and two minor placings from his only five starts for over $30,000 in stakes.

McLeod has been training for many years but she only acquired her public trainer’s licence a year ago and she is proving she has what it takes to make it in professional ranks.

The winner’s owner-breeder Bill Fawdry was emotional after the win as the Globe Derby is a race he had been trying to win since its inception 25 years ago.

He races the gelding in partnership with his daughter Tamra Fawdry who also is a trainer-driver but has been sidelined with injuries sustained in a race fall at Devonport last month.

Listen to what Bill and Tamra Fawdry had to say about Hugo Play’s Globe Derby win – click here.