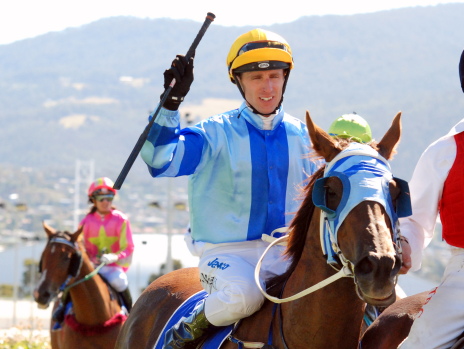 TALENTED mare Huon Cry will be transferred to Jason Clifford’s Geelong stables this week following her impressive win in the gateway Shopping Centre (C2) Handicap over 1100 metres at Tattersall’s Park on Sunday.

Huon Cry made it back-to-back wins when she came from what looked to be a hopeless position 200 metres out to grab victory in the last stride over Heartbreak Lass and race leader Lord Stamford.

The four-year-old mare returned to racing from a long spell on Hobart Cup day and produced a brilliant performance to win a strong class one handicap with top Victorian jockey Darren Gauci aboard.

Gauci intimated after the win that he believed the mare would be capable of winning a decent fillies’ and mares sprint race in Melbourne.

On Sunday jockey Brendon McCoull had Huon Cry settled near last and when he made his move leaving the back straight she was at least 15 lengths off the leader that had kicked clear at the top of the home straight.

McCoull took short cuts and persevered with rails runs but 200m out he was baulked for a run.

However, when he finally eased his charge off the fence 100 metres from home Huon Cry dug deep and charged home to win by a narrow margin.

Huon Cry was bred by one of her part-owners Rex Colless who races the mare in partnership with his partner Kerstin Braun and three of his mates from Sydney – Dennis Garlick, Bob Powell and Mark Greenhalgh.

Clifford, who officially took over his Geelong stables last week, said he was impressed with Huon Cry this preparation and he was looking forward to her joining his team in Victoria.

Listen to what owner-breeder Rex Colless had to say about Huon Cry’s latest win – click here .