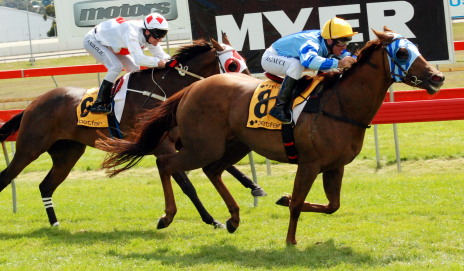 LIGHTLY raced four-year-old mare Huon Cry signalled her arrival as a class act when she powered her way to a brilliant first-up win in the Thorpe Industries handicap (C1) over 1100 metres at Tattersall’s Park on Cup Day.

Huon Cry was bred by one of her part-owners Rex Colless who races the mare in partnership with his partner Kerstin Braun and three of his mates from Sydney – Dennis Garlick, Bob Powell and Mark Greenhalgh.

It was Huon Cry’s third start but she had already shown her ability by winning on debut in Hobart and she only had one other outing before being sent for a spell.

“While her debut win was very exciting, it was great to win a race on Cup day because the big crowd and the atmosphere are electric and that makes the win more thrilling,” Colless said.

“We think the mare has a bright future and her times suggest that because she’s run the fastest last 600 metres on the day.”

“Her rider Darren Gauci was rapt in her and said he was confident of winning a long way from home,” he said.

Huon Cry is trained by Jason Clifford who is about to relocate to Victoria where he will train out of stables at Geelong.

However there is no certainty that Huon Cry will become part of Clifford’s Victorian team.

“We are yet to decide whether we will go with Jason to Victoria,” Colless said.

Jockey Gauci was full of praise for the mare.

“This mare will win a fillies and mares’ race in Melbourne. She relaxed really well for me and has obvious improvement in her,” Gauci said.