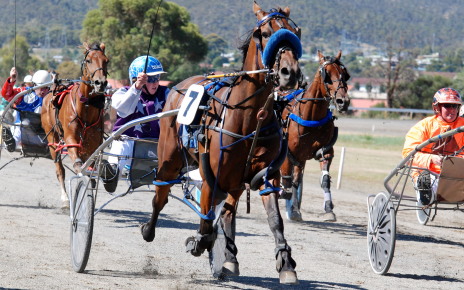 HYDEHURST Boy staked his claim on the Light Harness Tasmania Cup with a convincing win in a heat at New Norfolk yesterday.

The Tommy Pullen-trained gelding produced a powerful finish from well back in the field to emerge triumphant over Twograndahand and Flyin Indi Air over 2550 metres on the Kensington Park circuit.

Hydehurst Boy was well driven claiming novice Alex Ashwood who allowed the five-year-old to settle just beyond midfield after he stepped away cleanly from the standing start.

Pullen said Hydehurst Boy had not been the easiest horse to train but after a multitude of gear changes and a recent series of acupuncture treatment the trainer was confident of a very forward showing at New Norfolk.

The remaining LHT heat was taken out by the Phillip Ford-trained Land Of Panaarm that made a midrace move to find the front and from there on in it was a procession.

The well-backed favourite Left Loaded ($3.20) worked hard midrace to find the breeze outside of the leader Promising Demon but when driver Nathan Ford called on Left Loaded to extend leaving the back straight the gelding failed to deliver and he was the first horse beaten nearing the home turn.

Land Of Panaarm (Panorama-Willing Armbro) went into the race on the back of an impressive win in Launceston that followed minor placings in C2-3 events.

Land Of Panaarm (Gareth Rattray) kicked clear turning for home and had no trouble holding Our Sir Lew and Sir Yoie at bay over the concluding stages.

The final of the LHT Cup will be held at Tattersall’s Park in Hobart on March 20.