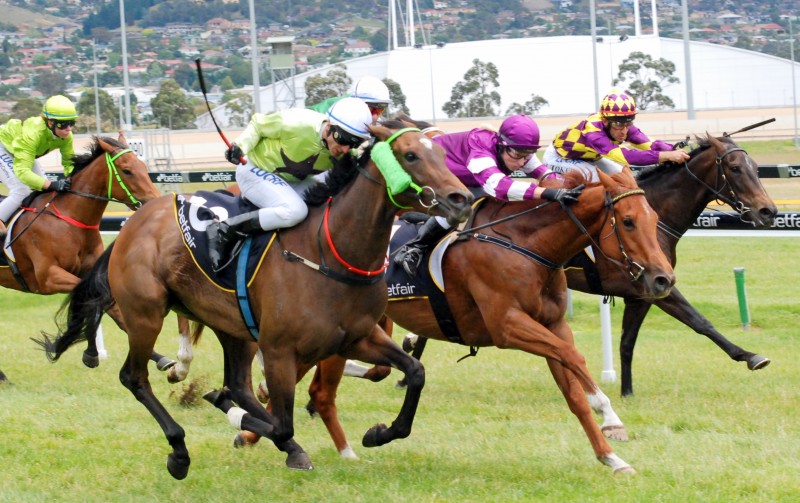 THE outcome of the Thousand Guineas at The TOTE Racing Centre in Launceston tonight is likely to reveal which three-year-old filly will star favourite of the locals in next month’s Tasmanian Oaks.

The Thousand Guineas boasts a star studded line-up that would befit any feature three-year-old event on the calendar.

The lightly raced Hyperbole had her colours lowered last start when second in a fillies and mares’ benchmark 72 over 1400 metres in Hobart but that followed two impressive wins in restricted company but against older and more experienced opposition.

Hyperbole shows enormous staying potential with tonight’s 1600-metre trip ideal at this stage of her preparation that will conclude in the Tasmanian Oaks.

The John Blacker-trained Shayana staked her claim on the Thousand Guineas with an emphatic win in a maiden/class one handicap over 1600 metres in Hobart last Sunday week.

Shayana has been set for the Thousand Guineas and while Blacker is keen to progress her to the Strutt Stakes (2100m) on Hobart Cup day to test her at the Oaks distance he is sure the filly will be very hard to beat over 1600m.

“Her sectionals in winning over 1600 metres in Hobart last start were outstanding and based on times she is going to be very hard to beat, especially after drawing barrier one,” Blacker said.

“The filly has done exceptionally well since her last start so we are going into this race with a lot of confidence,” he said.

Until her last stat failure behind Admiral in the 3YO Trophy in Launceston over 1400 metes, Bella Venus was one of the Thousand Guineas favourites.

She won three in succession before her fall from grace but back against her own sex she should be given another chance.

The Scott Brunton-trained Rustical has flown under the radar this preparation winning at big odds at her past two starts.

Rustical won over 1100 metres and 1400 metres coming from well back in both races and she has given the impression the 1600 metres will suit.

Longford trainer Bill Ryan has a big opinion of Savrajette and while she was beaten into second place in a BM62 at her most recent outing over 1200m she is a vey relaxed horse that is suited to the trip.

The other feature race on the card tonight is the weight-for-age tattsbet.com.au Stakes over 1200 metres and it to boasts a quality line-up.

Hellova Street finished third to Grand Tycoon in a quality handicap over 1100 metres in Hobart after winning the Newmarket handicap in Launceston so back at his favourite track the cot Brunton-trained four-year-old should be hard to beat.

“I’m excited about this race because I have a huge opinion of Hellova Street and while he is great over 1200m I firmly believe we won’t see the best of him until he gets out to a mile (1600m),” Brinton said.

Brunton also has Royal rapture in the race and while he is coming off an injury-enforced pet-up he will wear the blinkers and Brunton expects him to be right in at the business end of proceedings.

Grand Tycoon should again provide the strongest opposition and his stablemate Arenzano would be a genuine contender is she could deliver her best.