I Love It wins Bow Mistress 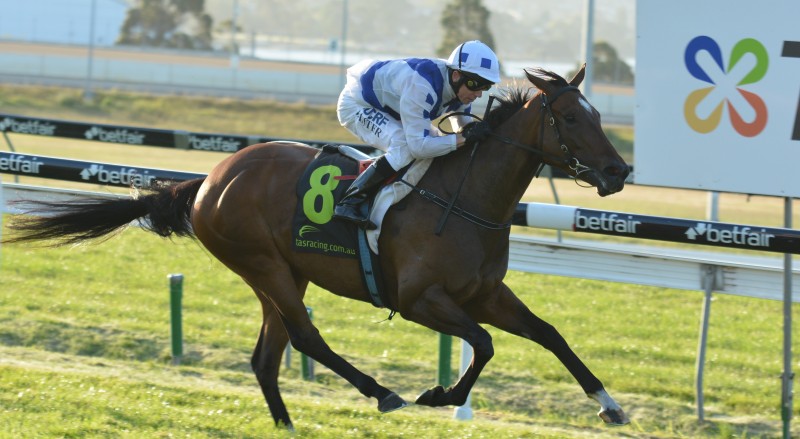 LIGHTLY raced Victorian mare I Love It realised a long-range plan for her owners and trainer John Salanitri when she gave her rivals a galloping lesson in the $150,000 Group 3 Bow Mistress Trophy over 1200 metres at Tattersall’s Park in Hobart yesterday.

I Love It was having her first start since winning a fillies and mares handicap at Ballarat in November last year and it was after that triumph that connections opted to target the Tasmanian feature.

Trainer John Salanitri was unable to attend the meeting but his brother and part-owner Frank Salanitri, who also bred the mare, was on hand to greet the media upon the mare’s return to the unsaddling enclosure.

“This plan was hatched last year and it also is a very emotional win,” Frank Salanitri said.

“We lost out brother Don and he always wanted to win a Group race with this mare and now she has achieved it so it is very special.”

“We bred her and for her to do what she did today at only her eighth start is just fantastic and I’m sure she has a great future ahead of her,” he said.

I Love It was heavily backed in from $8 to start the $4.80 favourite but with regular rider Stephen Baster in the saddle the end result was never in doubt.

“The mare was in cruise mode throughout the race and when we had to get going about the 500m she hauled them in pretty quickly and powered home to win easily,” Baster said.

“She has such a brilliant turn of foot an she showed that today, “he said.

While I Love It was impressive, there was a lot to like about the Tasmanian mare Miss Middleton that flashed home from well back to run second in advance of another Victorian-owned and trained mare lady Lakshmi with race leader Grand Gallop finishing fourth.

Miss Middleton is likely to progress to the Group 3 $125,000 Vamos Stakes over 1400 metres under lights in Launceston on February 18 in which she will more than likely start one of the favourites.

Salanitri confirmed I Love It would not stay to contest the Vamos Stakes.

“We take this mare home now and prepare her for some good mares’ races in the Autumn,’ Salanitri said.