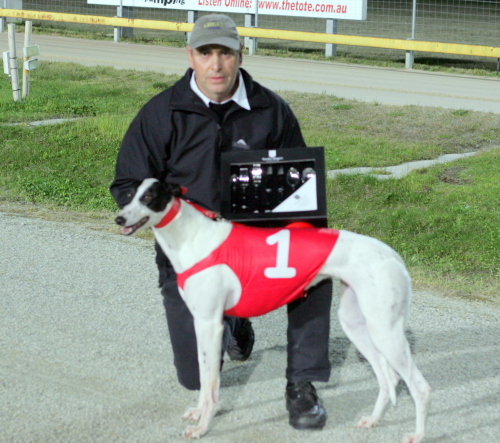 FORMER Queensland greyhound Ice Krystals has been a welcome addition to the Laurence Mulligan kennel and in Hobart last week she delivered one of her best performances to win the Charmer Lodge Laurels over 461 metres at Tattersall’s Park.

Ice Krystals made the most of her inside draw by beginning wall and when she was able to hold her rivals out to the top turn it paved the way for a comfortable win.

She hit the home turn with a slender break but when trouble eventuated back in the field she burst clear and went on to score by a length from Posh Emma that chased hard in the straight with Raw Emotion a closing third.

Mulligan was thrilled with the win and heaped praise on his pint-sized bitch.

“This little bitch tries her heart out every time she goes around so she deserves to win a nice race,” Mulligan said.

“She is probably one of the most genuine dogs I’ve trained,” he said.

Ice Krystals was bred and owned in Queensland and was dispatched to Tasmania in November last year.

The bitch’s owner Susan Smith sent the pup to her daughter Angela Langton in Victoria and it was her who sent Ice Krystals to Mulligan.

“I have a friendship and association with Angela and Geoff Britton and it is through that relationship that this bitch ended up with me,” he said.

Ice Krystals has started 30 times in Tasmania for nine wins and as many minor placings with the $5000 Laurels winner’s cheque bolstering her career stake earnings to almost $17,000.

“She has done a great job because she is at grade three level on all tracks and that’s no mean feat for a bitch that only weighs under 26 kilograms,” he said.

Mulligan said Ice Krystals is lucky to be still racing after an incident in the catching pen in Launceston over three months ago had the potential to end her racing career.

“She got savaged in the catching pen at Launceston and she ended up with a deep gash in her chest and shoulder.”

“The wound healed and there was no major muscle damage but she was quite shy in the catching pen for a while and still is to some extent and she also was a bit field shy for a while but she is getting over it,” he said.