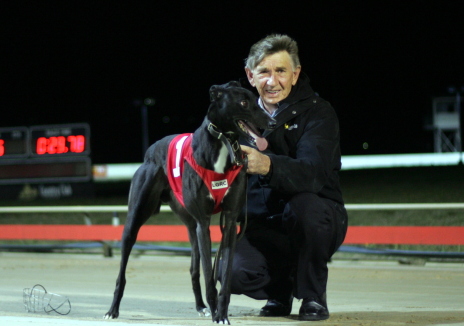 TALENTED sprinter I’m A Fencer was finally rewarded for his consistency when he powered his way to an effortless win in the Illingworth Classic final at The TOTE Racing centre in Launceston on Monday night.

The David Crosswell-trained dog made full use of the inside box to establish a clear margin at the first turn and from there on in it was a procession as he extended his lead at every turn to eventually go on and score by almost seven lengths from litter mates Strapper’s Boy and Clyde’s Angel (Collide-Ricky’s Angel).

I’m A Fencer (Go Wild Teddy-Wooreddy) was heavily backed to start the $1.20 favourite and understandably so given his form going into the race.

This was his 17th win from 28 starts and his sixth win from a dozen outings on the Launceston circuit.

I’m A Fencer has always shown above average ability and this win is testament to his consistency.

“He is a very good dog that deserved to win a good race,” Crosswell said.

The dog has recorded some sensational times on the Launceston track with his best 29.64 set in winning his Illingworth Classic heat.

The Illingworth Classic is one of the most sought after races by owners and trainers as it is named in honour of Ollie and Des Illingworth who made great contributions to the industry in Tasmania.

Ollie Illingworth was one of the instigators of greyhound racing in Launceston.

He was considered a great trainer and won more than his share of feature races.

Ollie passed away in 1974 but the name was carried forward by his son Des who made his mark in greyhound administration.

Des, with the assistance of the late Clem Hoggett, was responsible for securing Sky Channel coverage of all Tasmanian greyhound racing.