Im Corzin Terror to line up in Tasmania Cup 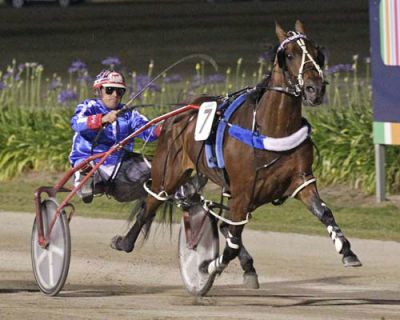 Im Corzin Terror will be an added draw card at Tattersall’s Park in Hobart with the TPC expecting a huge crowd to witness what is its showcase event.

Trainer Amanda Grieve said the seven-year-old’s victory at Ballarat was unexpected owing to six late scratchings from the race courtesy of a controversy over the measurements of the sulkies being used on those horses that included top chances Guaranteed and Restrepo.

Grieve took the win in her stride despite there being only four left to contest the Group 1 event.

Grieve explained that the horse had no luck at Cranbourne when he was making ground along the inside but he was – “up to his right trip (at Ballarat)”.

With the Group One decimated by scratchings, Im Corzin Terror – driven by Chris Alford –worked to the lead early in the four-horse field.

Given an easy time during the middle stages, the son of Western Terror sprinted home in a breathtaking 53.9 seconds, rating 1:59.7 for the 2710-metre trip.

“We’ll go Tasmania at the weekend then he will defend his Bendigo Cup title before the Shepparton and Victoria Cups,” she said.

Internationally acclaimed modern country band The Wolfe Brothers will provide a two-hour concert as a lead-up to racing on Sunday with the band scheduled to start playing at 11 am and play through to 1 pm.

Adult patrons wanting to attend the concert in the upper deck of the main grandstand can do so at a cost of $25 while general admittance will be $10 with discounts for children and pensioners.

The race card also boasts the George Johnson mares’ classic along with a strong support card.