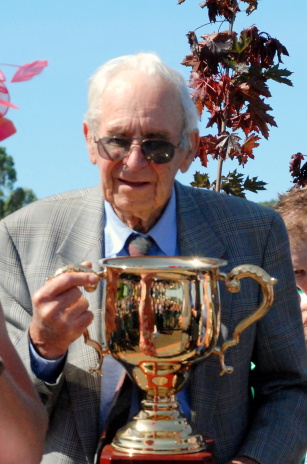 TASMANIA’S thoroughbred racing industry is today mourning one of its most loveable and endeared characters, Wilfred James “Jim” Osborne, who died on Tuesday night, only three days before he would have celebrated his 94th birthday.

Mr Osborne’s contribution to the state’s racing industry was recognised last year when he was awarded the Order of Australia and two years ago he also was inducted into the Tasmanian Racing Hall of Fame.

When he received his OAM for service to the racing industry and the community he was humble, questioning whether he was a deserving enough recipient but all in the industry applauded the honor that was bestowed upon a man who almost single handedly ensured the longevity of the annual New Year Day race meeting in his home town of Longford.

When the small but unique grandstand was burned to the ground, Mr Osborne led a fundraising committee that raised enough money to have the stand rebuilt and it was subsequently named The Jim Osborne Stand in his honour.

He hardly missed a New Year Day meeting after first attending as a young boy prior to World War II.

Mr Osborne was all that was racing.

He stood as a committeeman with the Tasmanian Turf Club from 1972 to 1998 and he is one of a select few to have been inducted into the club’s Hall of Fame.

He served on the committee of Thoroughbred Breeders Tasmania of which he was a life member but his involvement in the community stretched beyond racing.

Mr Osborne also was a life member of the Northern Tasmania Events Club with whom he served as a committeeman from the mid 1950s.

He became a member of the Midlands Agricultural Association in 1937 and later was honored with life membership.

He was a Justice of the Peace for 50 years and he spent 25 years with the Campbell Town Council serving as a deputy warden for much of that time.

Mr Osborne was passionate about Tasmanian racing and he was always up for a debate on any issue that might affect the well being of the sport he loved.

He raced horses for most of his life and held shares in a number of gallopers that were bred by Armidale Stud.

He celebrated one of his biggest thrills in racing when a mare he part-owned, With Decorum, won the 2010 Devonport Cup when ridden by Craig Newitt and trained by John Blacker.

Mr Osborne was a regular attendee at race meetings in the North of the state until recent months when his health started to wane.

He will be sadly missed and at the thoroughbred meeting in Launceston last night (Wednesday) jockeys wore black armbands in the last two races as a mark of respect – PETER STAPLES.