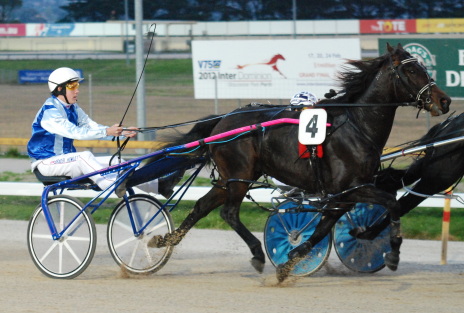 THE Tasmanian harness industry is in mourning with the death last week of former trainer-driver-breeder and owner Don Cornish.

He was born in June 1929 and 14 years later he became interested in harness racing, Cornish acquired his drivers/rider’s and trainer’s licence at 15-1/2 years of age and experienced immediate success.

He drove a double on the week he turned 16 and recorded 12 wins in his first three months in the game.

A year later he gained employment with the Department of Main Roads but he continued to train one or two horses.

Cornish acquired Floodlight in 1949 and he was that horse’s regular trainer-driver. At one time Floodlight was the highest stakes winning Tasmanian horse – gallopers included.

The gelding won 42 races (nine in Adelaide and eight in Melbourne) including the 1951 A G Hunter Cup.

Floodlight competed in three Inter Dominion Grand Finals between 1952 and 1954. He was third in Sydney, fifth in Perth and secured the same finishing position in the Adelaide final, starting from 12, 24 and 36 yards behind respectively.

Cornish trained many winners after Floodlight retired including Our Flood (14 wins), Gold Icon (9), Sweet Music (9), Best Trump (5) and Pay Silver (5). A hip replacement operation at 60 resulted in Don retiring from training and driving in 1989.

Cornish also excelled as a harness administrator. He was a committeeman with the Southern Tasmania Trotting Club for 20 years and treasurer and vice chairman of the Tasmanian Pacing Club in the early 80’s.

He also was treasurer during the 1981 Inter Dominion held in Hobart.

Cornish was awarded Life Membership of the Tasmanian Pacing Club in 1996, a Meritorious Service Award from the Australian Harness Racing Council in 1994 and from Harness Racing Tasmania in 2006. He was a committeeman of the Southern Tasmania Light Harness Association for approximately 5 years.

In 2006 the industry recognised his achievements by awarding him the Edgar Tatlow Medal which was something that he cherished.

Cornish passed away peacefully on June 14 after a long illness. He is survived by his wife Beverley and children Les and Dennis.

He will be sadly missed by all who had the good fortune to know him.