Innasbrook set to move on 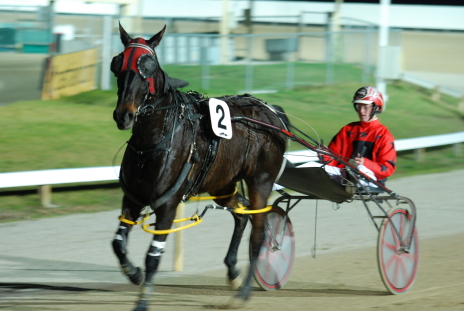 UNDERRATED five-year-old pacer Innasbrook is proving to be a welcome addition to the Nathan Ford stable.

Innasbrook scored an impressive win at Tattersall’s Park in Hobart on Sunday night to register what was the gelding’s second win in the space of three starts for his new owners.

Innasbrook stepped straight to the front from his inside front row draw after which he was superbly rated by teenage driver Dylan Ford.

Ford released the brakes leaving the back straight the last time to set up a winning margin and while the gelding was starting to feel the pinch 80 metres out he had a big enough lead to hold out his rivals in the run to the line.

Innasbrook hit the line about 1-1/2 metres clear of Prettyboytoby with Luke Thomas a similar margin away third.

“A couple of my long-time owners bought this horse a few months ago and while he’s not the greatest horse in the stable he is getting the job done,” Ford said.

“He did what he had to do tonight to win and you can’t ask for more than that,” he said.

Innasbrook has won three and been placed four times since joining Ford’s stable but the trainer says it might be time for the five-year-old to move on.

“I reckon he’ll be put up for sale after this win because the blokes who own him like to turn them over and they should be able to move him on because there’s probably still a couple of wins left in him,” he said.

Innasbrook was bred by Kerrie Edwards who owned and trained the gelding prior to him changing hands.

He won six and was placed as many times when in Edwards’ care.