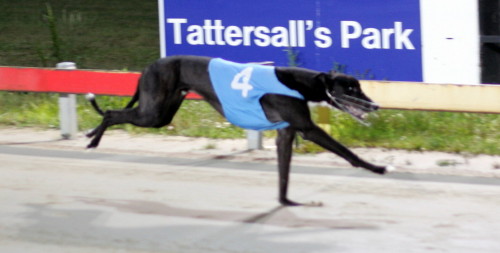 NSW greyhound Disintergrate would only need to mirror his first attempt on the Hobart circuit at Tattersall’s Park to win the Gold Cup final over 461 metres tonight.

Disintergrate made an impressive Tasmanian debut last week when he won his Gold Cup heat and clocked a sizzling 25.97 at what was his first look at the circuit.

The Charlie Gatt-trained dog showed brilliant speed to lead from box four last week and from box seven tonight he should be able to easily find the front if he shows the same amount of dash at the start.

None of his rivals have been able to break 26 seconds, although so only bad luck should beat him.

CradocPark (box 4) has clocked 26.14 on the circuit and looms as one of Mick Stringer’s main contenders for the Wrest Point Hobart Thousand series and Eagle Eye clocked a personal best of 26.18 in wining from box one in last week’s heat and he will again wear the red vest.