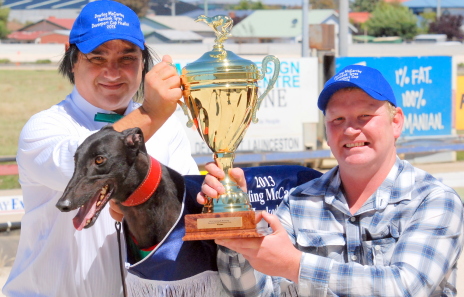 THE outcome of the $35,300 Group 3 Devonport Cup (452m) at the Devonport Showground today was almost an anti-climax with Victorian greyhound Allen Benji emerging triumphant over the local champ Rewind.

A huge crowd gathered to watch what most hoped would be Rewind’s 50th win that would have given him the record of being the first dog to win successive Devonport Cups.

But the fairytale ending was not to be and instead top Victorian trainer Graeme Bate snared his second win in the race when the son of Allen Benji (Buttsie Bale-Swiss Bale)  gave his rivals a galloping lesson in the Group 3 event over 452 metres.

Allen Benji won his heat and was well backed to win the race firming from $4.40 to start equal second elect at $3.70 along with local sprinter Burnt Fuse while Rewind was firm favorite at $2.70.

But when Allen Benji began brilliantly to have the lead soon after the start and Rewind was slowly away and suffered a bad check near the top turn the outcome was never in doubt.

Allen Benji extended his lead and hit the line over seven lengths clear of Rewind that tried valiantly to reduce the margin with rank outsider Shanlyn Peanut running the race of her life to finish third almost three lengths astern.

Bate was not at the meting but his travelling foreman-handler Rob Camilleri said the dog had been set for the Devonport Cup some time back.

“Graeme (Bate) looked at this race with a few dogs but Allen Benji was always going to be one of the best chances because he is an excellent one-turn dog,” Camelleri said.

“When he won his heat we were confident he would be hard to beat in the final but Rewind is such a great dog you can never be too confident when he is in the race,” he said.

Allen Benji will have his next start in a heat of the Warragul Cup on Sunday night.

“The dog will line up in a heat of the Warragul Cup and depending on how he performs Bate may consider sending the dog back toTasmaniafor the Launceston Cup (515m) next month.

“Graeme is going to try the dog over 500m an if he does what Graeme expects then he could be back for the Launceston Cup heats,”  Camelleri said.

While Allen Benji spoiled Rewind’s party,Hobarttrack record holder Bergermeister suggested he may be back to his brilliant best with a devastating win in the Cup consolation race.

Bergermeister made his rivals look ordinary in winning the Angus Evans Memorial over 452 metres clocking a slick 25.69 seconds which was only nine hundredths o a second away from Allen Benji’s Cup-winning time.

Bergermeister ended up in the Shayne Whitney kennel last month and almost made it into the Cup final with a game second to Burnt Fuse in their heat at his first outing for Whitney.

But yesterday he flew the lids and gave nothing else a chance on his way to an effortless win.

“To have a dog of this quality come to the kennel is great and it looks as if the change of environment has got him switched back on,” Whitney said.