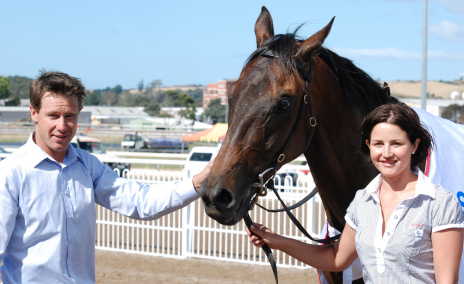 INTERSTATE invader Fieldmaster gave his rivals a galloping lesson a tSpreyton Park today on his way to scoring an emphatic win in the $100,000 Simons Design Centre Devonport Cup over 1880 metres.

With Victorian jockey Steven Arnold in the saddle, Fieldmaster travelled well in the run just of the pace set by race favourite The Cleaner and outsider Makes Cents.

When the leaders started to capitulate nearing the top of the home straight, Arnold called on his charge for the supreme effort and the six-year-old gelding forged clear and went on to score comfortably from Lightly Spiced (Craig Newitt) and Jakcorijim.

Arnoldwas ecstatic after the race and declared the Patrick Payne-trained gelding would take a lot of benefit from the outing.

‘He stepped well from a good gate and put himself in a good spot and all I had to do was get him going after those favourites in front a long way from home,” Arnold said.

“We had to take off about 600 metres from home so he has done a good job to keep going like he did,” he said.

Payne campaigned Fieldmaster in Tasmania last season for a win in the Jockey Club Cup at his first try in the state in January last year and he went on to finish on the heels of the placegetters in the AAMI Hobart Cup before finishing third to Prevailing and Geegees Blackflash in the Launceston Cup.

Arnold said he would more than likely ride Fieldmaster in the Hobart Cup at Tattersall’s Park on February 10 but it would depend on whether the trainer’s sister Michelle Payne was back riding by that race.

The Cleaner capitulated in the home straight to finish 10th of 14 and over eight lengths from the winner.

Listen to what trainer Patrick Payne had to say about Fieldmaster’s win – click here for the audio file.