Interstate plans for Love The Moment 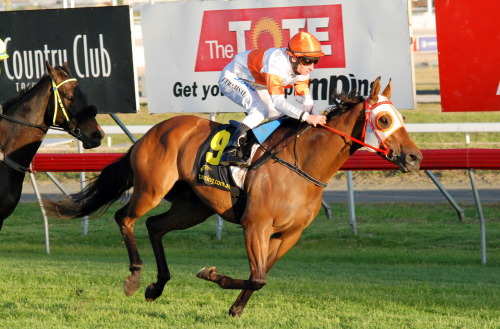 ROWELLA trainer Kerrie McCarthy has her sights set on a trip to Melbourne with four-year-old mare Love The Moment after she impressed with a convincing win over 1600 metres under lights at the TOTE Racing Centre in Launceston last Thursday night.

“We have races picked out at Caulfield and Moonee Valley over the Christmas period, with both races over 2000 metres,” McCarthy said.

“She will then have a light freshen up and we will aim her at the Launceston Cup (2400m on February 23),” the trainer said.

Love the Moment settled well for jockey Remi Tremsal at the back half of the field with a hot tempo set by Centenary Diamond and Risk It.

But when Tremsal called on his mare to extend at the top of the straight she quickly hailed in the leaders and went on to score comfortably over Our Magic Boy with the favourite Kite Runner almost two lengths away in third.

Tremsal was full of praise for the daughter of Savoire Vivre.

“She settled beautifully for me and after I got out at the turn she finished it off like a good horse.”

“I’m sure she has a future this mare” said Tremsal.

McCarthy said dual Newmarket-winning jockey Justin Hamer has been offered the rides in Melbourne and when the mare returns to Tasmania, provided the rider can make the weights.