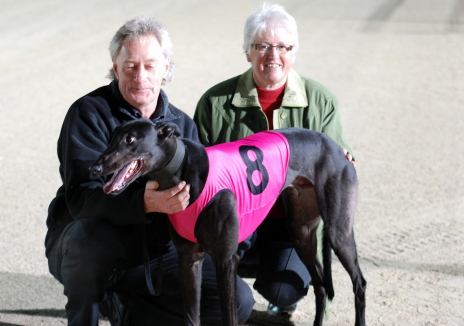 CONSISTENT sprinter New Recruit has earned another interstate trip according to his trainer Mick Stringer who celebrated four winners on the 11-event card at Tattersall’s Park in Hobart last night (Thursday).

New Recruit notched an impressive win in the Silver Trophy final over 461 metres in what was another outstanding run by the son of Paddy’s Flame.

New Recruit began only fairly from box eight but he ran a straight line to the top turn and had the leaders covered turning for home.

He put two lengths on his rivals at the top of the straight and hit the line with 1-1/2 lengths to spare from Collyn Tiger that flashed home from well back with Shanlyn Hirdy also rattling home, coming from last on the home turn after copping two checks.

“This dog has done a marvellous job because that’s his 20th win from 34 starts which is no mean feat and I think he’s been placed in seven others so it’s hard to find a dog that is more consistent than this bloke,” Stringer said.

“He positioned up a lot closer to the leaders tonight so I was pretty confident at the half-way mark that he’d win.”

“He’s been across the water before but I reckon he’s ready to go back and be very competitive in one of those grade five heat and finals series that they run at The Meadows,” he said.

While Stringer heaped praise on the dog that is owned by Carlene Cuthbertson and Sally Wilson but the dog’s latest victory gave Stringer his fourth Silver Trophy victory in the space of five years.

“That’s the fourth time I’ve won this race. I won it twice with Topline Doovee and once with my other star bitch Kyra Shiraz so yes, the race has been good to me.”

Stringer rates Topline Doovee as one of the best sprinters he has trained and New Recruit is following in her footsteps.

“The way New Recruit is going I think he could end up nearly as good as Topline Doovee,” he said.

New Recruit’s next mission is the TGOTBA series that begins this week in Hobart with the final on Thursday week.

But Stringer is hoping for richer pickings with his kennel star.

“We’ve got the National Sprint Championship in Hobart in August so it would be nice if he could get into that race but he would probably have to improve a shade to get to that elite level.’

“He is such a consistent dog that if he draws alright on any given night then he is going to be very competitive but there’s no doubt it would be nice to have him represent the kennel in a National Sprint final,” he said.

Stringer is unsure if he can get any more out of New recruit.

“I just keep doing what I do because at the end of the day the dog is racing in good heart and you can only win, so in all honesty I doubt that I can do anything else to get any more out of him,” he said.