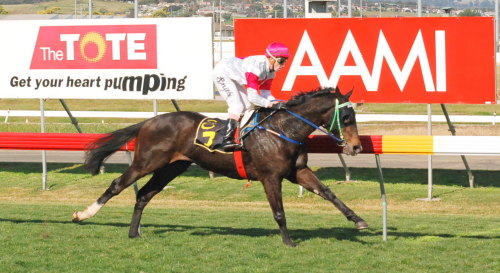 PROMISING three-year-old Second Dozen may have earned a trip to the mainland after he scored another emphatic win at The TOTE Racing Centre in Launceston on Sunday.

The John Blacker-trained gelding had to work hard three-wide early before settling outside of the leader Tuesdaynitedelight where he stayed until forging clear at the top of the home straight.

Challengers loomed but he simply slipped into overdrive to extend his lead. He was being eased down over the final 50 metres to score by over two lengths from Annabel’s Dream with Ghandi a half-head away third.

Blacker was thrilled with the performance and confirmed the gelding had what it takes to go on and win feature races this season.

He was presented at the May 2008 South Australia weanling sale but was passed in when bidding stopped at $6000. His reserve was only $10,000.

He was then put through the Tasmanian Yearling Sale ring and was purchased by Blacker for $14,000.

Listen to what trainer John Blacker had to say about Second Dozen’s latest win.