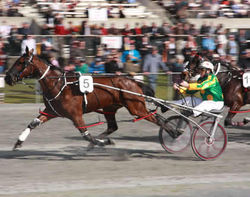 MOST of the interest in Tasmanian harness racing last week was focused interstate with some of our top performers including Our Sir Jeckyl and Aapennon tackling races in New South Wales ands Victoria respectively.

But across the Tasman a two-year-old filly by the name of Delightful Christian was waving the flag big time forTasmaniain a $150,000 feature race atCambridge.

Delightful Christian is owned by the Rattray Family Trust and Wayne and Wendy McLaughlin whom together have shared success with pacers over a number of years with all theiir previous investments prepared at Longford by Barrie Rattray.

Delightful Christian (Christian Cullen-Delightfu Paula) made her way into the Group 1 Jewels series fillies’ final over 1609 metres and was sent out a $6.30 chance while Onlyforyou was heavily backed to start the $2.50 favourite.

After working three-wide for the first 400 metres Delightful Christian eventually found the lead.

When Delightful Christian’s driver Maurice McKendry tried to slow the tempo Dexter Dunn aboard Onlyforyou dashed his charge around the field to face the breeze 1000 metres out to ensure the tempo was honest.

But when Dunn called on Onlyforyou to challenge nearing the home turn, Delightful Christian shrugged her off and burst clear and went on to defeat the favourite by 1-1/2 lengths with the highly promising Rozelski a similar margin astern.

That covered the purchase price of $NZ92,500 but the filly’s real value is more in her prospects as a broodmare.

Barrie Rattray was all smiles at theHobartharness meeting on Sunday night and it had more to do with what Delightful Christian had done the day before than the win of his three-year-old geldingCiskeithat will now take winning form into next Sunday night’s Globe Derby Stakes final.

Listen to what trainer Barrie Rattray had to say about Delightful Christian’s Group 1 win – click here.