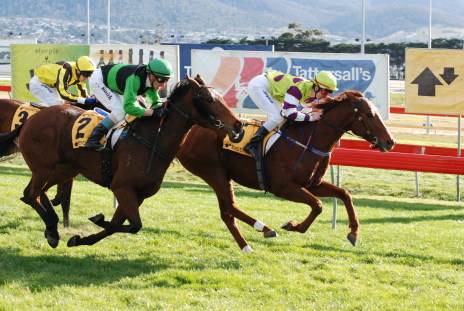 With talented Victorian apprentice Rebecca Williams in the saddle, Iowna Gold settled handy to the leaders and travelled well to the turn and when the rider called on the gelding to extend he cruised to the lead.

He then staved off late and determined challenges from race favourite Abervale Star and Future Dividend.

Abervale Star made a long searching ruin from the 600-metre peg, just as she did to win her maiden at her previous start in Launceston but in the end she gave away too big a start.

Future Dividend raced handy to the lead and battled on tenaciously to suggest his maiden win might be just around the corner.

Iowna Gold went into the race on the back of a luckless fourth in Launceston where he was held-up at crucial stages in a race won by Dark Rum.

“It’s been frustrating, to say the least, with this horse,” Schuuring said.

Iona Gold is owned the trainer and his wife Kristy who have been onsite property managers of Aceland Stud at Whitemore for the past two years.

Listen to what trainer Nigel Schuuring had to say about Iowna Gold’s maiden win – click here .