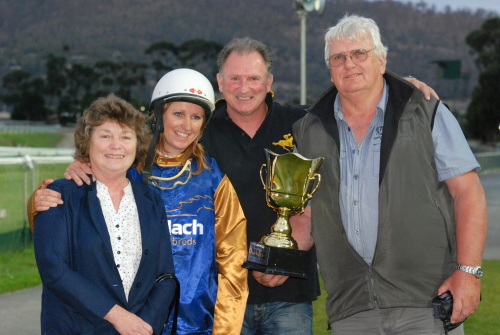 Kendall and his wife Karen set the So That’s Life gelding for the race three months ago and their decision to campaign Thats So Irish and traveling companion Leighton Buzzard in Tasmania produced great results.

Leighton Buzzard won both of his starts and That’s So Irish captured the big prize after finishing fourth in his lead-up race to the Derby last Sunday week.

With Karen Kendall in the sulky, That’s So Irish showed good early speed to lead and after a pedestrian first half (800m) run in 65 seconds, the gelding dug deep at the business end of the race when challenged seriously by the other interstate invaders in the home straight.

That’s So Irish went on to defeat the Peter Tonkin-trained Devilish Smile by a metre with The Kerryn Manning-trained and driven The Phantom a half-head away third, just in advance of Beautide that was the first Tasmanian horse home.

The trainer paid tribute to the drive by his wife.

“That was one sensational drive and no doubt it was the difference between winning and losing,” Jack Kendall said.

“It’s great when a plan comes to fruition and for us this is an absolute buzz,” he said.

Thats So Irish had enough speed to lead and when Manning made her move early t race around the field to sit at the leader’s wheel most thought the pace would be solid.

But Manning was content to let her charge The Phantom cruise alongside the leader without applying any real pressure until they entered the back stretch the last time.

When the pressure was applied the leader found plenty and was doing as well as any other runner when they hit the line.

Beautide led the three-wide brigade for the last lap and kept finding over the concluding stages while Quastor Centurion caught a ride home on the back of Beautide but was unable to make an impact from that far back in the field.