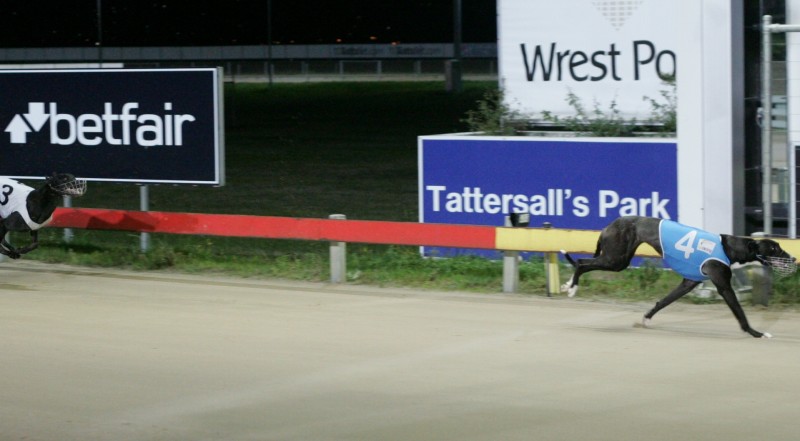 Robert Gourlay has been waiting for a top class dog to find its way into his kennel and it looks as if the dream has been realised in the form of Izon Destruction that scored a sensational win in his semi-final of the HGRC Betfair Breeders Classic last night.

Izon Destruction was impressive in winning his qualifying heat last Saturday in a time of 26.35 but in his semi he sizzled over the 461 metres in 26.04 which was clearly the best of the four semi-final winners.

The dog began brilliantly to quickly set up a three length break on his rivals courtesy of a sizzling first split of 5.06. He extended his lead and ran home strongly to score by 4 1/2 lengths from Mister Noble that chased hard throughout with Touch Of Venus a neck away third.

Gourlay has been training on and off for many years but he was forced to take a break owing to a car accident that almost left him wheelchair bound.

Training greyhounds is considered remedial therapy for Gourlay and having Izon Destruction in the kennel will make the early rises on bitter cold mornings at his property at Collinsvale easier to handle.

Izon Destruction (Lochinvar Marlow-White Ruler) is owned by Gourlay who for the past year or so has been relying on modest performers to keep the till ticking over.

The Gary Johnson-trained Buckle Up Fletch made his way into the final with a solid performance in his semi-final.

Buckle Up Fletch went into the race as the most experienced of the eight runners and that’s how it played out.

The Dyna Lachlan-Everlong Bale dog easily accounted for Code Black scoring by two lengths with Enfield Mask doing his best work at the business end of the race but over three lengths adrift.