Jack back to youthful best 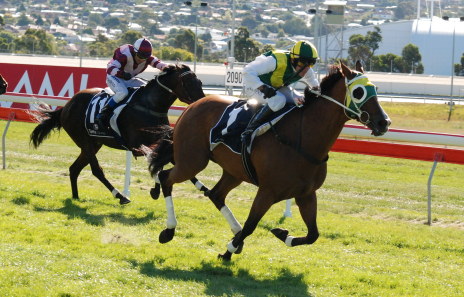 A DECISION to target a series of weight-for-age races in Tasmania has rejuvenated the racing career of former star sprinter Youthful Jack.

The Ross Stitt and Geoff Sheedy-owned gelding was a star as a young horse with connections even aiming for a Golden Slipper and at three he was as startling over sprint distances.

But he developed a soft palate problem that eventually required an operation.

It was just over 2-1/2 years between wins but ever since he scored that victory at Wyong late last year he has gone from strength to strength.

The Wyong win convinced trainer Stitt to send the horse to Tasmania and placed him in the care of Spreyton trainer Adam Trinder for the duration of the horse’s Tasmanian campaign.

At Tattersall’s Park in Hobart yesterday (Sunday) Youthful Jack completed stage two of the three-part assault when he blitzed a quality field in the $100,000 Tatts Group Thomas Lyons Stakes over 1400m.

Youthful Jack was not as fresh as he was at his first outing in Tasmania so rider Robert Thompson allowed the gelded son of Youthful Legs to settle just beyond midfield and he didn’t make his move until the field reached the 600-metre mark.

When Thompson called on his mount to improve the gelding slipped into another gear and when the gelding was balanced in the home straight he sped clear and went on to score comfortably over the gallant Rave Night with Life To The Full a close-up third.