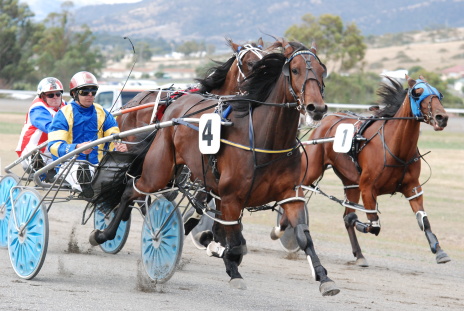 BRIGHTON trainer Eric Jacobson stamped his claim on the Sires Produce Stakes when he prepared the winner of both heats at Kensington Park New Norfolk on Saturday.

Then it was Scruffy Jake’s turn to impress and he worked home well to defeat race leader Isntshesomething (Village Jasper-Gaviston) by a metre with Brookefield Lad almost nine metres away third.

Scruffy Jake (Metropolitan-Wildeve) went into the race on the back of an impressive win in a 3C0 in Hobart a week earlier but he had to fight all the way up the home straight to get the better of Isntshesomething that kept finding under strong driving from her trainer Nathan Ford.

Both of Jacobson’s heat winners are by Metropolitan but that’s where the similarity ends.

Metro Master is a chunky type with a near fluid gait while Scruffy Jake has a more streamlined physique but doesn’t yet have the stamina of his stable mate.

It was Metro Master’s second win from 15 starts but he also has accrued eight minor placings to adequately pay his way while Scruffy Jake has faced the starter nine times for two wins and a minor placing.

Both heat winners were driven by ace reinsman Ricky Duggan so if both draw well punters might be well advised to support whichever Duggan chooses to partner.

The Sires Produce final will be held at New Norfolk on April 2.