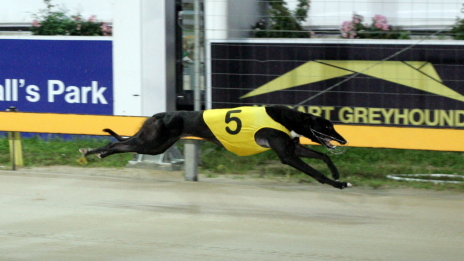 LEADING trainer Ted Medhurst has some talented pups in his kennels and one to shine last night was Jaguar Pines that gave his rivals a galloping lesson in the The Mercury Juvenile over 461 metres at Tattersall’s Park in Hobart.

Jaguar Pines (Premier Fantasy-Jenlyn Stanley) was having his third start and went into the race with minor placings to his credit on the Hobart circuit.

He debuted with a third behind Sweet Tooth Ted on February 27 and followed up three nights later with a game second wearing the red vest when beaten a length.

The black dog is owned and raced by the Pines PTN Syndicate in Queensland if which Craig Cassidy is manager.

Jaguar Pines is by Irish imported sire Premier Fantasy that was considered the fastest dog in the world when he was at his peak in 2004.

Premier Fantasy had his racing career cut short prematurely as a result of smashing his hock in a semi-final of the 2004 English Derby.

His progeny have not taken Australia by storm but his presence is starting to be felt in feature races across the nation.

Jaguar Pines is a nice type that is likely to progress gradually through his grades.