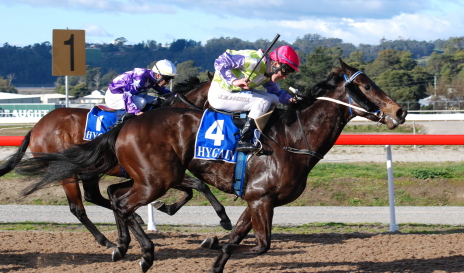 STEPHEN Maskiell emerged from last Sunday’s thoroughbred meeting at Spreyton as the state’s leading rider for season 2011-12 despite ending the day winless.

Maskiell’s season tally was 64-1/2 wins which edged out Brendon McCoull by a half-a-win that came courtesy of a Derailleur dead-heating for first with Stockbroker (Ryan Plumb) in a maiden-class one in Launceston on February 22.

McCoull was sidelined for the last four meetings through injury and he also spent two months out of the saddle during January-February which no doubt cost him his 13th premiership.

While Stephen Maskiell failed to win a race last Sunday his son Jason Maskiell closed the season with a double.

Jason saluted aboard Black ‘N’ Tough in the class two handicap for Spreyton trainer Leon Wells and on the Julie Richards-trained Relentless Pursuit in the last race on the card.

For Black ‘N’ Tough (Tough Speed-Black Cent) it was her third win from only five starts but arguably her best effort this campaign.

Wells said Black ‘N’ Tough has a bright future and while he believes she is not ready for the paddock he may have no option but to tip her out with no suitable races for the three-year-old filly in the coming weeks.