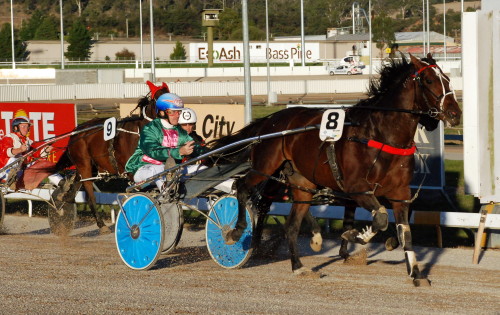 TALENTED young harness racing reinsman Damien Spring suffered a serious shoulder injury last season which cost him many drives aboard Jay Bardon; a horse he believes has a huge future.

Spring was sidelined for many months but he was reunited with Jay Bardon in Launceston recently where they combined to win a C1 and in Devonport last night they were back in the winner’s circle but this time in a feature race.

Spring guided the Barry Freeman-trained gelding to an effortless victory in the Latrobe Cup over 2297 metres, defeating Shaw To Be King by seven metres with Harleken Wized almost 12 metres away third.

Jay Bardon was never troubled in the run, leading from the pole position and gave nothing else a chance as he careered away from his rivals on the homer turn when Spring allowed the four-year-old Topnotcher gelding more rein.

“I’ve built up a good relationship with Jay Bardon and it was disappointing to miss out on a few drives on him last season,” Spring said.

“He’s proved to be a good sit and sprint horse but tonight he’s been able to lead and win so it shows he’s quite versatile,” he said.

Spring said he hopped Jay Bardon could continue to improve and mature so that he could be aimed at the Raider Stakes (4YO sires stakes) at Devonport in May.

Jay Bardon has won two of his only three starts this season with this latest triumph taking his overall win record to seven from 19 starts with seven minor placings contributing to his total stake earnings of over $35,000.