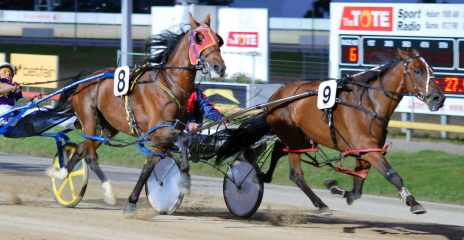 Our Sir Jeckyl proved too strong for the state’s boom pacer Gedlee in the Cannonball Charge (FFA) over 1609 metres.

It was Gedlee’s first time at the races since finishing a game fifth in the Group 1 Tasmania Cup in December.

Our Sir Jeckyl and Gedlee both went back at the start from their second row draws and when Our Sir Jeckyl’s driver Ricky Duggan made a move in the back straight the last time Gedlee latched onto his back for a cart home.

Our Sir Jeckyl forged to the lead at the top of the home straight and while Gedlee took plenty of ground off him in the run home the winner still had a half-metre to spare on the line with Dodgermemate almost seven metres astern.

Our Sir Jeckyl’s part-owner Jamie Cockshutt said the gelding’s main mission is the Easter Cup in Launceston in April as he attempts to win the race in successive years.

“Our Sir Jeckyl is my champion and I love him no matter what,” Cockshutt said.

“If we were ever going to beat Gedlee it was tonight when he was first-up and a bit vulnerable.”

“The Easter Cup is the main aim this preparation and everything is right on track for that race in Launceston,” Cockshutt said.

Our Sir Jeckyl will have his next start in the $10,000 Metropolitan Cup in Hobart on March 20 with Cockshutt confirming the gelding will bypass next Sunday night’s Devonport Cup.

“The plan is to run in the Metropolitan Cup in three weeks and then go to the Golden Mile in Launceston as his final hit-out before the Easter Cup,” Cockshutt said.