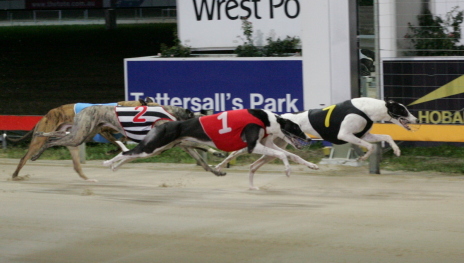 STAR sprinter Jethro had to call on every ounce of his talent to emerge triumphant in a division one heat of the TGOTBA series in Hobart last week.

Jethro settles back in the field after beginning only fairly from box seven and he then had to weave a path in the home straight to grab victory in the shadows of the post from the consistent Like Whisper with Shanlyn Hirdy flashing home for third.

Katsidis made the pace as usual with Au Revoir hot in pursuit while Jethro and Lika Whisper stayed in touch to the top turn.

Lika Whisper moved up to claim the leaders and hit the front but he had no answer to Jethro’s powerful finish.

Jethro stopped the clock at 26.12 which was a personal best for the Butch Deverell-trained dog.

Shanlyn Poh clinched his place in the division one final with a convincing win in the remaining heat.

The Graeme Moate-trained dog made the most of the inside alley to land just behind the pace set by the speedy Claire Delune that led to the home turn.

However, the more fancied rivals including star New Recruit were involved in a jam-up back in the field.

Shanlyn Poh cruised past Claire Delune and pinched a break while Decembrist and New Recruit matched motors when clear in the straight to grab the minor placings.