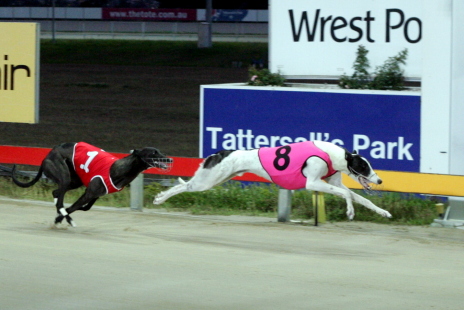 JETHRO gave an indication he may have a future as a stayer after he scored an impressive win over 599 metres at Tattersall’s Park in Hobart last Thursday night.

The lightly raced litter brother of Hobart maiden Thousand winner Zavance Man began well from box eight and crossed to the rail son after leaving the first turn but not as quick as Wynburn Whirl that flew the lids from box one and set up a four length break over the favourite heading to the top turn.

But when Jethro ($1.60) moved alongside the leader at the top of the straight he forged to the lead and looked set to win by panels.

However, Wynburn Whirl showed courage to stick on and only went down by a length with Din’s Chappi a distant third.

Jethro showed promise from the outset winning a heat of the Devonport club’s Breeders Classic only to get pole-axed in the final finishing seventh behind New Recruit.

He had his first try at the middle distance in Launceston in mid-November and finished a creditable third to Azz Always when sent around the $1.20 favourite.

Jethro’s trainer Butch Deverell is confident the dog will develop into a handy all-rounder but if he starts to excel at middle distances there’s no doubt he will step up to the longer journeys and hopefully be a contender for the National Distance Championship that will be hosted by the Hobart club in August this year.