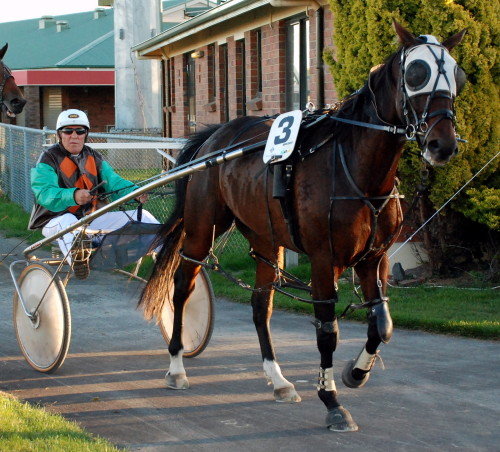 ONE of Tasmania’s most underrated pacers Jonzaak gave his trainer Dallas Krushka a welcome tonic when he powered his way to an impressive win in the Coastal Pacing Thousand over 2297 metres at Devonport last night (Sunday).

With experienced reinsman Rohan Hadley in the sulky, Jonzaak came from well back in the field to defeat El Jays Maverick by 2-1/2 metres with Topoftheclouds four metres astern.

Krushka is still recovering from injuries sustained in a race fall in Launceston in December when he was catapulted from the sulky after his charge cannoned into a fallen horse.

Krushka said he asked Hadley to take the gelding back at the start from his outside front-row draw and then drive him for luck.

Hadley obliged but what Krushka didn’t take into account was how masterfully the driver would execute the instructions.

It was one of the best drives delivered this season on the Devonport track.

He improved his position from the rear by scooting along the rails to settle three-back the fence.

Hadley bided his time until the right opening appeared and when he took a run where angels fear to tread, the gelding forced through a gap and pounced on the leaders halfway up the short home straight.

Krushka heaped praise on his wife Pam who has been doing most of the preparation work while her husband is convalescing.

“Rohan (Hadley) has been coming down to do the fast work but Pam has been looking after everything else,” the trainer said.

It was Jonzaak’s fifth win from 31 starts with the $5300 winner’s cheque taking the gelding’s career earnings to almost $27,000.