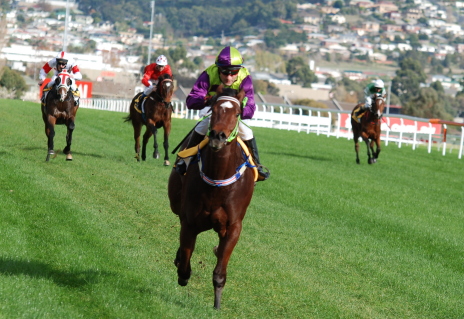 BRIGHTON trainer John Luttrell found it difficult to contain his elation after his lightly raced two-year-old Josie’s Gee Gee scored an emphatic win in the Bravehearts Inc Maiden over 1100 metres at Tattersall’s Park in Hobart today.

With in-form jockey David Pires aboard, Josie’s Gee Gee showed brilliant early speed to lead and had his rivals off the bit and struggling nearing the home turn.

He led by 1- lengths and when Pires took him to the outside fence to avoid the rails in the home straight he maintained his momentum and went on to score by just under five lengths from Kaluhiokalani with first-starter Count The Stars a long neck away third.

Luttrell said he couldn’t believe the $31 being offered on fixed odds with Tattsbet so he laid three substantial bets at the luxury odds.

Josie’s Gee Gee (Atlantis Prince-Josie’s Double) is owned and raced by Paul and Elizabeth Geard and they too made the most of the gelding’s big odds.