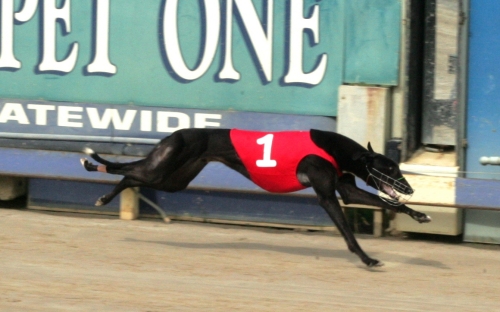 The Kevin McConnon-trained dog gave his rivals a galloping lesson as he sped over the 452 metres in a slick 25.56 to score by almost a dozen lengths.

Juice Man has only been in the care of McConnon for six starts but in that time he has won three and been unlucky at two other outings when fourth after copping multiple checks.

At his latest start he began brilliantly from box one and gave nothing else a chance on his way to an 11-3/4 length win over Paua To React with Exaltation a close-up third.

McConnon is confident the son of Where’s Pedro has the potential go right through to top grade.

“When I got this dog he had a reputation for having an attitude problem but he has settled in really well at my place and is a pleasure to have in the kennel,” McConnon said.

“He was a bit unruly when he first arrived but the change of environment obviously suits him,” he said.

Juice Man is raced by the Full Moon syndicate based in Melbourne.

“The owners are very pleased with what he’s done since joining my kennel and I expect him to keep improving.”

“His time at Devonport was terrific for a grade five dog and I’m sure he can go quicker,” he said.

Juice Man had two unplaced starts in Victoria before being sent to Tasmania.

His Tasmanian tally stands at four wins from eight starts and if McConnon is on the mark there are plenty more to come.