Julia on the way up 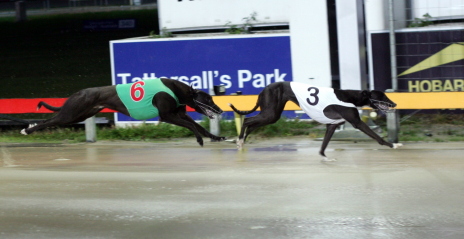 VETERAN North-West Coast trainer Wayne Maine rarely has more than a handful of dogs in his kennels these days but he still manages to be a regular visitor to the winner’s circle.

He is preparing three owned by Helen Pringle and one of them Irinka Julia looks set to win her way through the grades in quick smart time.

Irinka Julia made it two wins in succession when she dispensed with a handy field of juvenile performers over 461 metres at Tattersall’s Park in Hobart last night.

Irinka Julia (Irinka Dennis-Sussudio) chased home the very smart Millie Grace in the Laurels final before she opened her winning account in a juvenile at Devonport last Tuesday week.

She proved too strong for Ace King that day and that dog again had to play second fiddle last Thursday night.

Irinka Julia showed good early speed to lead from box three and she had no trouble holding her rivals at bay to go on and score by a length from Ace King with Braddon Bullet almost three lengths away third.

She stopped the clock at 26.39s that was a handy effort in the conditions.

Maine is also having success with Irinka Julia’s litter brother Irinka Jarryd that has won three of his four starts.

Irinka Jarryd has won a juvenile and a grade five over 452m at Devonport with a best time of 25.78at his most recent outing and he has triumphed in a grade five in Hobart over 461m clocking a26.50.

Maine’s other Pringle-owned kennel tenants are Break Even that has won 10 from 31, of which most were when in the care of Ted Medhurst and Single Choice that has won only one from six but shows promise.