Just a matter of time for Tucker 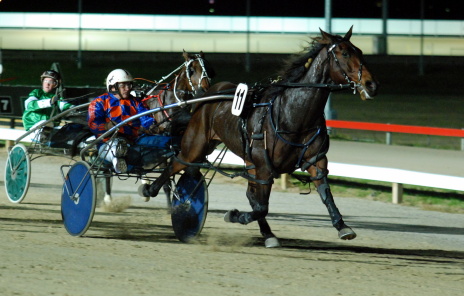 CHESTER BULLOCK is one of Tasmania’s harness racing stalwarts who virtually puts back into the sport whatever he takes out.

Rarely a meeting goes by in Launceston that doesn’t boast a race sponsored by his construction consulting business and his financial support for novice driver series such as the Youngbloods Challenge has probably ensured their survival.

As a trainer he is enjoying arguably his best season and in Hobart last Sunday night one of the stable’s shining lights Cardinal Tucker scored impressively in a C2-C3 over 2579 metres to take his win tally to five from his past six starts.

With master reinsman Barrie Rattray in the sulky, Cardinal Tucker produced a powerful finish to come from near last at the bell to easily account for his rivals.

Cardinal Tucker has been something of a revelation this season and Bullock attributes the five-year-old gelding’s consistent form to maturity.

“It’s great to have a horse in the stable that has won five of his past six but it isn’t that surprising,” Bullock said.

“I put it down to him being exceptionally bred.”

“He’s by Blissfull Hall and we all know his stock don’t start to fire until they are older horses but it’s on the dam side that the quality lies.”

“He (Cardinal Tucker) is out of Classic Made and every one of her foals to race has won,” he said.

Classic Made was bred by the late Keith Stanley and while she performed well on the race track with nine wins and 10 placings from 39 starts her true worth was realised at stud.

The mare only produced four to race by her first offspring Clone (x Lucky Cam) won five and laced three times before she suffered a career-ending injury but she has excelled at stud producing four that have all won, the latest Elsudoku that won a two-year-old in Launceston at her fifth attempt late last year.

Cardinal Seth suffered an injury after only one start in May 2008 but after more than three years on the sidelines Bullock produced him to win first-up in Launceston in a strong C0.

The Village Jasper gelding has since won an other three, the latest at his most recent outing in Launceston last Sunday week.

“The Cardinal Seth story was a great one and his win first-up from such a long break from racing was a feat almost unheard of in harness racing,” he said.

Cardinal Tucker has been a great money spinner for Bullock with the gelding’s latest win taking his career earnings to almost $37,000 from only 21 starts.