Just As Fancy has star qualities 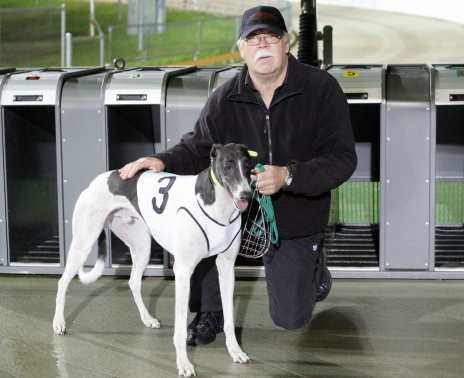 JUST AS FANCY confirmed his status as one of the most promising pups in Tasmania when he led all the way to win the division three final of the TGOTBA series at Tattersall’s Park in Hobart last Thursday night.

The Beau Shanahan-trained dog was having only his third start in the state and had no trouble keeping his unbeaten record intact.

Just As Fancy Premier Fantasy-Flash Fancy) won at his first try in the state in a juvenile event over 452 metres in Devonport and at his subsequent outing he toyed with his rivals to win his heat of the TGOTBA series last Thursday week and in a slick time of 26.13 at his first try on the track.

While his time was slower in winning the final (26.31) it did not detract from the way in which he went about taking care of a very strong field of juvenile performers.

He began well from box three but the second favourite Millie Minor (4) quickly moved alongside and the well fancied pair powered their way to the home turn with little separating the two outstanding pups.

But in the home straight Just As Fancy answered the challenge and went on to defeat Millie Minor by a length with the reserve lashing Lil almost two lengths away third.

Shanahan believes Just As Fancy has a bright future.

“He had only one look at the track before he tackled the heat and to run that time (26.13) first-up was a good effort,” Shanahan said.

“He has terrific manners and he runs a straight line no matter what box he starts from and that’s going to get him a long way.”

“He’s a genuine dog that has plenty of strength and he showed that tonight when Millie Minor came at him strong in the straight,” he said.

Just As Fancy is owned by the trainer’s wife Mary.

The dog was bred in New South Wales where he was raised and broken in by Denis Barnes.

“We’ve had the dog about two months and he had a couple of starts at Dubbo in NSW but the plan was always to get him a bit of race experience before he was sent home to us,” he said.

Shanahan has been training for over 40 years with most of his time spent in NSW.

He packed up and moved to Tasmania about four years ago and when his handy dog Monster Prince was retired he took a year off.

“I always said that when Monster Prince stopped acing I’d take a break and that’s what I did.”

“I love this caper and I’ve usually been able to have at least one fairly good one in the kennel,” he said.