Justasmyrk ends season on a high 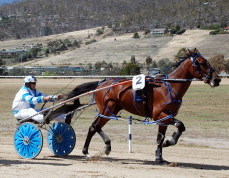 The Paul Williams-trained youngster toyed with his rivals in Hobart to win the Punters’ Pool 2YO over 2090 metres on August 16 then he followed up with a 40-metre plus win in a 2A1-2A2 in Launceston a week later.

Both wins were with talented reinswoman Natalee Emery in the sulky.

In what were almost identical performances, Iden Justasmyrk faced the breeze for most of the races but defied the tasks to forge clear turning for home and went on to win without being fully extended.

In Hobart he claimed the leader 300 metres out and strolled clear to score by almost 29 metres from Jonny Red Neat with Innasbrook about four metres astern.

But he was even more awesome in Launceston a week later where he demoralised a handy field to score b y 44 metres from Surprise Purchase with Spirited Ruler a further 4-1/2 metres away third.

The Paul Williams-trained gelding won at his second race start at New Norfolk in March but had to be content with minor placings from seven subsequent starts leading up to the Hobart win.

“This is a great way to finish the season but I must admit winning by those margins is a bit absurd,” Williams said.

“I thought he could win in Hobart but I never imagined he could do that to a field but he’s gone and done it again in Launceston.”

“He never went great times to win like he did so the margins, especially the latest effort, were a bit exaggerated because he only went a mile rate of 2.03.”

“He’ll go for a spell and I’ll bring him back for the feature three-year-old races during the Christmas carnival,” Williams said.

Iden Justasmyrk (x Grinfromeartoear) is owned by Elliott and Helen Booth who also bred the gelding from their foundation mare Iden Byrd.

Elliott Booth is a professional golfer who plays the Australian PGA Seniors Tour on which he has captured his share of prize money in recent years.

The Booths are keen standardbred breeders with Iden Byrd producing two smart fillies, Iden Miss Ellie and Iden Countess, both of whom are expected to produce winners.