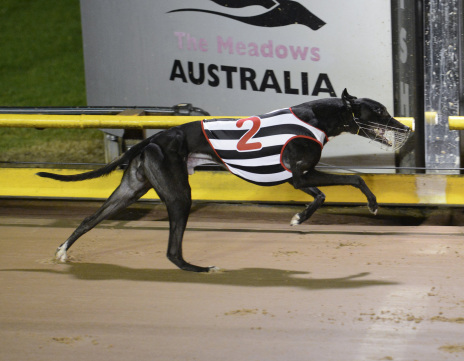 Two of Victoria’s finest stayers are coming our way for this year’s Wrest Point National Distance Final at Tattersall’s Park.

Angela Langton’s KARANJI won the Victorian Final at The Meadows on Saturday night August 11, and whilst hot favourite IRMA BALE was beaten fairly and squarely into second place, the Graeme Bate trained daughter of Bartrim Bale, was the AGRA wildcard entry into he National Final, so selected on her ranking for past great performances.

This includes a Group One win in this year’s Sandown Cup in which the mighty Miata ran third. Irma Bale’s career earnings to this point are in excess of $240,000.
On Saturday night, Karanji won on merit, after just scraping into the Victorian Final with a heat fourth behind Irma Bale a week earlier.

Before the home turn Karanji went around the railing Irma Bale, before himself railing inside the leader to forge clear by two lengths on the line. Irma Bale stayed on solidly for second with Fyna Bale in third.

His time was a useful 42.79, and the victory took Karanji past $65,000 in stakes as he posted win number 12 from 44 starts with 14 minors.
Both chasers should be well suited to the wide expanses of Hobart, and despite her second billing in the Victorian Final, Irma Bale is still likely to be the more favoured of the pair by punters.

Grame Bate has a marvellous record everywhere, but the Apple Isle Capital City has been especially kind to him, where he has won four Hobart Thousands, one more than any other trainer.