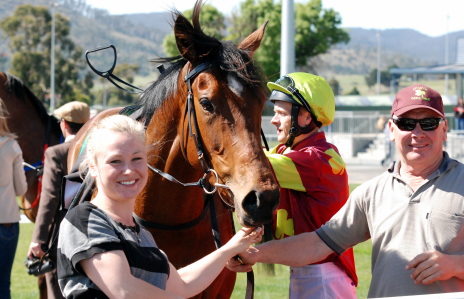 TEGAN KEYS was born into the thoroughbred racing industry as the daughter of a top trainer so it was inevitable that she would make her own mark in the sport.

At Tattersall’s Park in Hobart today (Sunday) she notched her first win as a trainer with only her second starter in a race.

Firevault raced handy to the leader Danestone for most of the race and when rider Kelvin Sanderson called on the mare to set sail after the leader that kicked two lengths clear turning for home she knuckled down to her task and went on to score by almost a length.

As an owner trainer Keys, 24, is only allowed two horses to train at any one time but she is already making plans to join forces with her father to form a training partnership further down the track.

Keys, who prepare her two gallopers on the family property at Wesley Vale on the North-West Coast, leased Firevault from Wayne Brown who had hopes of training in his own right but when those plans were shelved he agreed to lease the four-year-old mare to the aspiring young trainer.

Listen to what young owner-trainer Tegan Keys had to say about her first winner – click here .