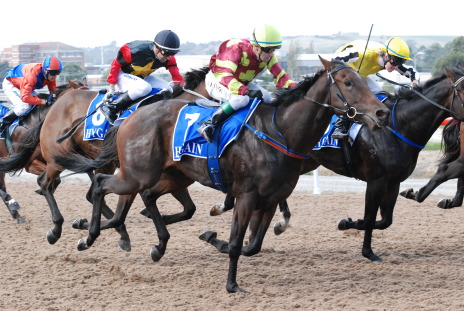 ASTUTE trainer John Keys has never been afraid to test his gallopers against top company so it came as no surprise that he may end up taking his promising three-year-old Sudden Glory to South Australia for that state’s Derby.

Sudden Glory scored an impressive win in the Atkinson Electrical Maiden/Class 1 Handicap over 1650 metres with in-form apprentice Rasit Yetimova in the saddle.

The three-year-old gelding ran down Overproof in the home straight to score by a head with former King Island gelding Mushala only a long neck astern.

While winning a maiden/class one at Devonport is a far cry from the opposition the horse would most likely meet in a South Australian Derby Keys remains confident Sudden Glory has what it takes to be competitive interstate.

“This horse has been plagued by bad barriers and illnesses that have kept from realising his potential here in Tassie,” Keys said.

“Even today he was kept out wide and copped a nasty knock but he kept finding so it was very pleasing from that aspect,” he said.

Sudden Glory (Helike-Skyworth) had two starts last preparation for a debut second to the highly promising Westering Home followed by a convincing win over Ambassadora in a small field of five at Tapeta Park.

Keys tipped the gelding out for a short break and he resumed on February 15 with a near last effort beaten over seven lengths but while he finished near last at his subsequent outing in the 3YO Classic he was only 5-1/2 lengths from the winner, Bel Price, and again was a victim of circumstances.

“Anyone who had a real good look at his previous runs would have seen how unlucky he’d been so this was not a surprise result for us,” he said.

Keys is no stranger to success in South Australia having won the 2011 The Janz Stakes with his brilliant two-year-old filly Triple Asset that also won a Group race in Melbourne.

“I believe Sudden Glory will be at his best over 2000 metres and beyond so for that reason I will test him in a race over 2100m in Tassie within the next fortnight and that will hopefully give me a better idea of where we are at as far as heading across the water is concerned,” Keys said.
Do you use Facebook? Make sure you like our new Facebook Page – click here .