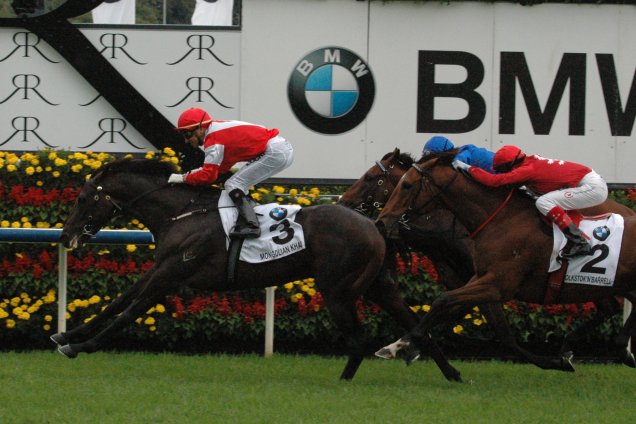 TASMANIAN thoroughbred Hall of Fame trainer-breeder Graeme McCulloch celebrated the greatest achievement of his racing career when Mongolian Khan, a horse he bred at his Grenville Stud at Whitemore, scored a courageous win in the $2 million Group 1 Australian Derby at Randwick in Sydney yesterday.

Mongolian Khan began his racing career in New Zealand and two months ago won the NZ Derby to give McCulloch his first Group 1 winner but success in the $2 million ATC Australian Derby far outweighed the NZ success.

McCulloch bred Mongolian Khan from his broodmare Centafit that he sent to Holy Roman Emperor at Coolmore Stud in the Hunter Valley.

“This is an unbelievable moment in my racing life because everyone who breeds thoroughbreds hopes one day to produce one good enough to win a Group 1 and this horse has won two,” McCulloch said.

“When he won the New Zealand Derby I was absolutely thrilled but to win the Australian Derby worth $2 million is something else.”

“I don’t know when my feet will be back on the ground but breeding one that wins a race like this is every bit as good as what people told me it would be.”

“This is a great day for Grenville Stud but an even greater day for Tasmanian thoroughbred breeding because this is absolute proof that we can achieve these results,” he said.

Mongolian Khan was  bred my McCulloch in partnership with Coolmore Stud but when the colt was put through the sale ring at a William Inglis weanling sale McCulloch bought the colt back for $9000 to buy out Coolmore’s share.

“I sent the colt to New Zealand and sold him at the yearling sale for $140,000, but he was resold at a ready to run sale for $220,000 and purchased by his present owners the Chinese syndicate the Inner Mongolia Rider Horse Syndicate managed by Mr Lin Lang,” he said.

McCulloch was invited to attend the NZ Derby by the horse’s owners and they also have provided all expenses paid trips for McCulloch and his family to Sydney.

Mongolian Khan is trained at Cambridge by Murray Baker who is predicting a very bright future for the McCulloch0bred colt.

weanling colt at foot by Magnus that will be put through the Magic Millions Weanling Sale in May.