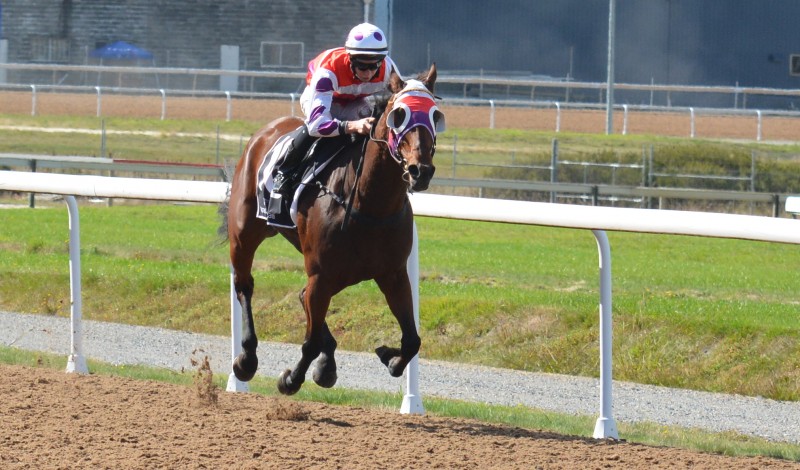 SPREYTON trainer Adam Trinder is hoping King Island import Serengeti Miss can emulate the feats of another Mare that made her way to his stables about two years ago.

Serengeti Miss showed plenty of early speed from a wide barrier (nine of 13) to lead and when Thornton gave her a slight dig turning for home the mare forged clear and went on to win by a length from Dream Roller with Set For Tea about 1-1/2 lengths away third.

“Serengeti Miss is owned by the same owners on King Island who sent me the mare Villa who also won on debut for me and went on to win multiple races over a couple of seasons,” Trinder said.

“The owners had been wanting to send this mare to me for some time because they have always maintained she is at least as good as Villa.”

“I worked this mare with my class four horse Sound Bar and she was very competitive with him so going into this race I was expecting a very forward showing.”

“The mare has a low rating due to her racing on King Island so I was obliged to get her into a race that she could win to improve her rating so that she can be laced in suitable races further down the track,” he said.

Serengeti Miss was well ridden by Thornton who is on loan to Trinder for three months.

Thornton is the youngest son of Victorian trainer Glenn Thornton who prepared Vibrant Rouge to win the Group 3 Vamos Stakes in Launceston in February.

Serengeti Miss was the second leg of a winning double for Trinder who also saddled up first-starter Foreshore Dane in a 2YO and Upwards maiden 1150 metres.

Trinder had high hopes for the California Dane filly purchased at the 2013 Tasmanian Magic Millions Yearling Sale but skeletal structural issues and immaturity prevented her from racing as a two-year-old.

But on her home track on Sunday Foreshore Dane delivered the goods on debut to score a narrow but impressive win.

With Victorian apprentice Boris Thornton in the saddle, Foreshore Dane, began well and travelled sweetly to the home turn and when asked for the big effort she responded well to eventually get the better of Krake close to the line.

“The filly was purchased by Gary Richards on the strength of success he and some other owners had with California Wish that was an outstanding galloper,” Trinder said.

“At first we thought she might be an early two-year-old to the races but she developed a few structural issues, had soft bone and was a little bit turned in one leg so we had to take our time with getting her to the races.”

“She has come along really nicely and I told the owners I would have been surprised if she didn’t run in the first three on debut and to be honest she surprised me a little bit with the way she toughed it out at the end,” he said.

Richards paid $20,000 for the filly and proceeded to convince a few friends and business colleagues to take a share including Hobart based Japanese restaurant owner Shigeyuki Hatano.

Magic Millions employee Tracey Ramskill also was quite taken with the filly at the 2013 sale and asked if she could take a 10 per cent share while Richards was signing the sale docket.