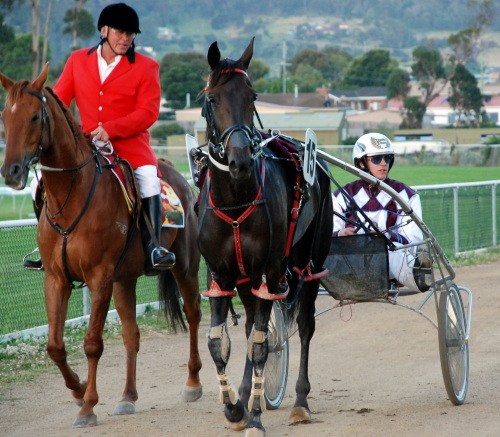 NEW ZEALAND pacer Bettors Strike confirmed his status as a rising star when he blitzed a star-studded field in the $125,000 Group 1 Wrest Point Tasmania Cup in Hobart on Sunday night.

The Cran Dalgety-trained five-year-old started off the back mark of 20 metres and led the three-wide train for the final 900 metres but made light of the task as he cruised to the front 200 metres out and won without being fully extended.

It was an awesome performance from a horse that arrived in Australia with a low profile but who has taken the nation by storm.

From his only three starts he controversially dead-heated for first in the Cranbourne Cup with Ohoka Nevada then stepped out in the silk department and powered home along the sprint lane to win the Group 1 Victoria Cup at TabcorpPark.

But this latest victory established him as a genuine star because he had to give away a start against what was arguably the best Tasmania Cup field ever assembled.

Driver Dexter Dunn summed up the performance when he said the horse has grown into a genuine grand circuit performer.

“I’ve driven this horse throughout his campaign and he’s definitely improved at each outing,” Dunn said.

“His performances I Australia have been outstanding and I’d say he has found his best form here.”

“He got all the favours in the Victoria Cup getting the run home along the sprint lane but tonight he had to do all the hard work but he was till able to put them away like a real good horse.”

“He travelled well into the race from the 1200m and he copped a slight check when he was pushed four-wide by Ohoka Nevada down the back but he just took it in his stride and finished the race off really well without having to give everything,” he said.

Bettors Strike (Bettors Delight-Winter Rose) will head back to New Zealand for a short break before being prepared to tackle the A G Hunter Cup in Melbourne in February and then head into the Inter Dominion series, most likely as one of the favourites.

The enormity of this latest win was emphasised when he gave arguably Australia’s best sit and sprint horse Tanabi Bromac a cold as he swept past him in the home straight.

Tanabi Bromac enjoyed the run of the race on the back of the leader Notaswethort and when Gavin Lang eased his charge off the leader’s heels turning for home it looked as if the Keith Cotchin-trained gelding would sprint clear and win.

But Bettors Strike cruised to that horse with consummate ease and once Dunn realised he had the race won he let the gelding cruise to the line to score by 1-3/4 metres from Tanabi Bromac with Notaswethort almost a metre away and just in advance of Ohoka Nevada.