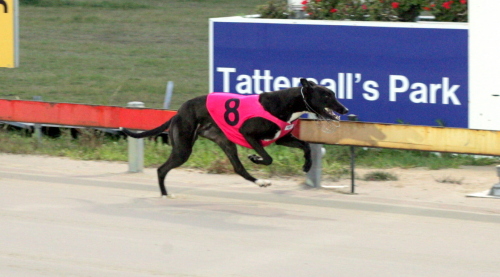 FORMER smart race bitch Kyra Shiraz may have just as big a career at stud as she did on the racetrack.

At Tattersall’s Park in Hobart last night (Thursday) one of her first progeny, Topline Usain, made an impressive debut with an effortless win in a juvenile over 461 metres.

The son of Hallucinate showed brilliant early speed from box eight to cross and lead and then left his rivals in his wake as he powered his way to a 10-length win over Break Even and Chinatown Sky.

Topline Usain ran third in a qualifying trial at Devonport on October 23 but his Hobart outing was his first under race conditions with Tote coverage.

He is owned by his breeders Rod Stamford and Nick Mills who raced Kyra Shiraz in partnership.

Kyra Shiraz, that retired with the impeccable record of 20 wins and 17 minor placings from 44 starts, produced 10 pups from her first litter with an even spread of dogs and bitches.

“It was great to get 10 pups with five of each sex and they all appear to take after their mum,” Stamford said.

“The ones that have been trialled all go fast with quick first splits, just like Kyra Shiraz.”

“”They have all been farmed out to a few trainers and Topline Usain is the first to win,” he said.

Topline Usain ran the 461 metres in 26.69 and while it may appear a shade pedestrian, the times overall were not as slick as usual.

Kyra Shiraz was trained for most of her racing career by Mick Stringer but he wound back his training operation about four months ago to concentrate on establishing a training track on his property at Magra north of Hobart.

Stringer also prepared star sprinter Topline Doovee for Stamford and Mills but her racing career came to an abrupt halt about six months ago when she suffered serious head injuries in a race fall.

Topline Doovee was expected to embark on a stud career but Stamford says the bitch’s injuries were not as bad as first thought and she could be back racing by the end of the year.

She had jaw fractures but they were only hairline and nowhere near as bad as first thought,” Stamford said.

“She has recovered really well and we are now confident she can return to racing,” he said.