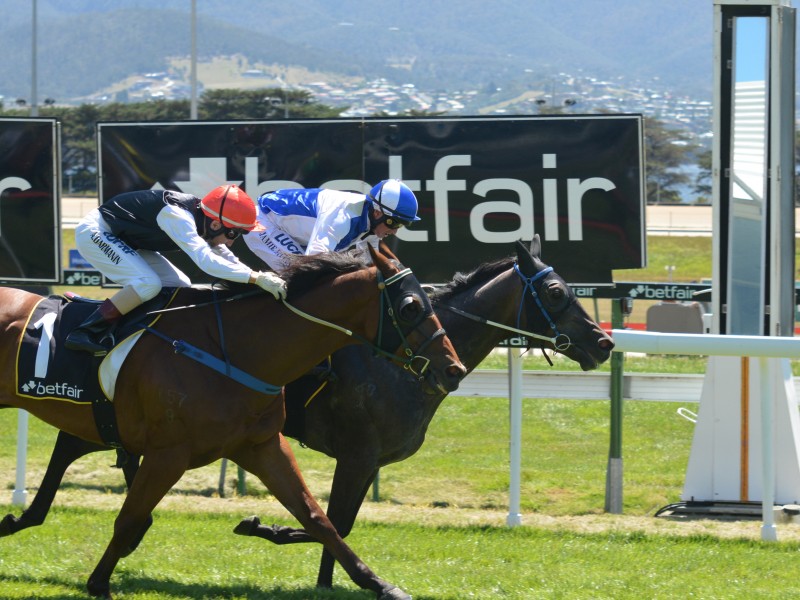 BRIGHTON trainer Royston Carr will decide within a week whether or not to embark on an interstate hit and run mission with his star filly Lady Jane.

At Tattersall’s Park today Lady Jane kept her unbeaten record intact when she powered home to score a narrow but decisive victory in a strong class two handicap over 1200 metres.

The daughter of Dreamscape-Kats Clause (x Weasel Clause) won her first two assignments in Launceston but today she was up against some quality opposition including The Ian Hay-trained Varian that despite carrying 60 kilograms punters elected to send around favourite at $2.40 while the lightly weighted Lady Jane started at $3.90.

The hot pace was set by the John Luttrell-trained Our Lucky Girl ($6) that established a five-length lead and had that break when she wheeled for home.

But Lady Jane’s rider Jamie Bayliss didn’t panic and allowed his charge to work into the race, although 400m from home he was urging the filly to try and make ground.

But when Lady Jane hit the 300m peg she knuckled down to her task and swept to the lead and she then had to stave off a late and determined Prince Stratum that loomed to win 80 metres from the line.

But Lady Jane dug deep to stave off the challenge and hit the line a head clear of Prince Stratum with Varian making up good ground over the concluding stages to finish a game third under his big weight.

“We are having a look at a race at Flemington in about three weeks but we’ll wait and see how she comes through this run before making any firm decisions,” Carr said.

“That was a very good win today because she had to take the rest of the field up to the leader and then have the courage to stave off the late chargers.”

“I was fairly confident before the race but 600 metres from home I was a bit worried but she really toughed it out. She’s a high cl;ass filly and proved that today to do what she did against older and far more experienced horses,” he said.

Varian was a luckless second in last season’s Hobart Guineas before going in to finish third in the Tasmanian Derby to be the first Tasmanian home in the race.

The West Quest four-year-old is a prime candidate for the major cups given his efforts in last year’s staying three-year-old events, so he will more than likely tackle the Summer Cup as a lead-up to the Betfair Hobart Cup to be run at Tattersall’s Park on February 09.