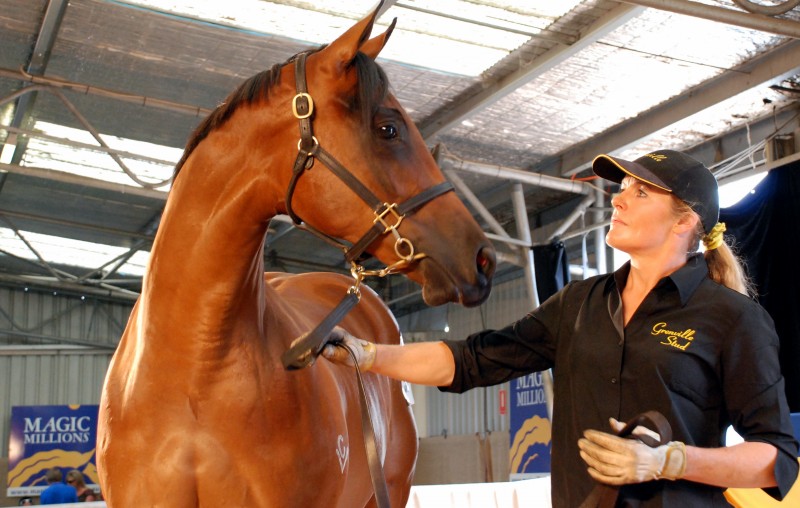 THE success of Tasmanian bred thoroughbreds interstate this season continues to highlight the value on offer at the Tasmanian Magic Millions Yearling sales.

LakeSententia, prepared by top Victorian trainer Darren Weir, is a prime example of the quality that emerges from a Tasmanian draft.

Lake Sententia took her stake earnings to almost $250,000 last week when she scored an impressive win in the Listed Centurea Stales over 2009 metres at Morphetville in South Australia.

The now four-year-old mare won at the top level last season and Weir expects her to be very competitive at Group level when she heads to Queensland next month.

Weir paid only $30,000 for LakeSententia at the 2010 Tasmanian yearling sale and last year he returned to buy her full sister and this time he paid only $24,000.

“The full sister is a very nice type, just like Lake Sententia and the owner was very keen to get the sister provided I liked what I saw and I did she is a very nice filly,” Weir said.

The unnamed full sister is being broken in at Armidale Stud and the early reports are that she is a ready made racehorse.

LakeSententia and her sister are from Talk Of Egypt that is by Aliocha from the Lord of the Dance mare Egyptian Dancer.

While LakeSententia is a great advertisement for the Tasmanian yearling sale, so too is the recent winner of the $200,000 Warrnambool Cup, BancaMo.

BancaMo was purchased by Mandy Gunn for only $2100 at the 2009 Tasmanian sale.

BancaMo, prepared by Tasmania’s leading trainer combination of David and Scott Brunton, has developed into a class stayer that also is very competitive at middle distances.

Before ending his latest preparation with his Warrnambool Cup win he won the Pakenham Cup (1700m) and a race at Flemington that followed luckless performances in Tasmania’s feature weight-for-age races during the AAMI Tasmanian Summer Racing Carnival.

Add to this the efforts of home-grown stayer Norsqui (x Matsqui) that won the Group 2 Adelaide Cup and finished a game second in the Group 1 Sydney Cup, there is a lot to be said for the standard of thoroughbreds being sold or produced in Tasmania.

Of the 94 yearlings sold at this year’s Tasmanian Magic Millions Yearling sale 29 were knocked down to interstate buyers and most of them will begin their racing careers on the mainland.