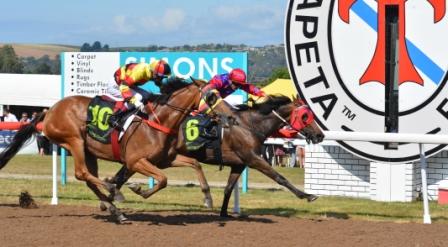 LANDER DOLLAR a horse that was punching around the tracks as a class one galloper 12 months ago scored the biggest win of his career when he led throughout to take out the Simons Design Centre Devonport Cup over 1880 metres at Spreyton Park today.

With Victorian jockey Dean Holland in the saddle, Lander Dollar showed his customary early speed to lead while the well backed At The Weekend trailed along the rails with Lingo parked in the breeze as they travelled down the back straight.

But 450m from home Holland allowed his charge to slip into another gear and the five-year-old gelding put four lengths on the opposition as they wheeled into the home turn.

Under strong riding from Holland Lander Dollar responded and he held on t defeat the fast-finishing Genuine Lad by a half head with the heavily backed Jakcorijim a close-up third ahead of At The Weekend.

Lander Dollar (Snowland-Dollar Dollie) found his way into the Brunton stable about two years go but early on he showed modest form so his part-owner Alan Johnson sent him to a spelling paddock at his property.

He sent the gelding back to Brunton’s stable and the horse flourished.

Listen to what trainer Scott Brunton had to say about Lander Dollar’s Devonport Cup win.