Lanercost cleans up with Tas Derby 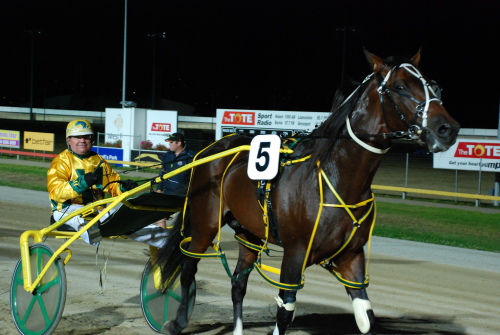 AUSTRALIA’S top three-year-old pacer Lanercost ended his Tasmanian campaign on a high with an effortless win in the SEW Eurodrive Tasmanian derby over 2579 metres in Hobart last night (Sunday).

The Darrel Graham-trained colt was coming off a brilliant win in the Australian Derby in Launceston a week earlier and that followed a track record-breaking win in a minor race at his first start in the state.

Graham has declared Lanercost the best pacer he has ever trained and the New Zealand-bred colt by Courage Under Fire is widely regarded by most astute pundits as a horse deserving of that crown.

“We came to Tassie to win the Australian Derby but he did have a gut buster in that race and there was doubt about staying on for the Tasmanian derby but he jaded well from last week’s run so we pressed on,” Graham said.

“This race fell away a bit in numbers and drawing the front made things a bit easier.”

Lanercost began well from gate five and soon after the start Graham allowed his stable star to roll to the front and from there it was a procession.

Tasmanian gelding Gedlee, that ran second to Lanercost in the Australian Derby, filled the same role with another game effort and another local Udoit was a close-up third.

Graham said he will head to Melbourne with the horse and then wait for a flight to Queensland where the colt will have a short spell before tackling the Queensland Derby.

Victorian filly Nickle Miss gave her trainer Maree Caldow her first major win in Tasmania when she led virtually all the way to win the Tasmanian Oaks.

With the trainer’s husband John Caldow in the sulky, Nickle Miss assumed control after travelling about 400 metres and she then staved off the odds-on favourite Bebop to win with something in hand, while Tasmanian filly Maggie Kennedy ran on well for third.