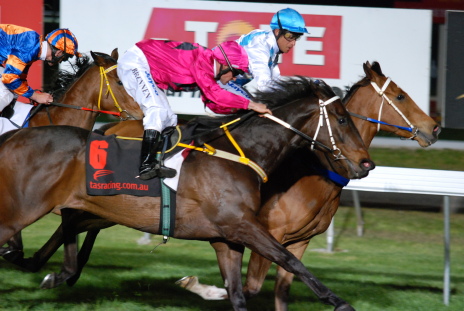 A NARROW but impressive first-up win under lights in Launceston last night by talented sprinter Mr Fashion has convinced his trainer Leon Laskey to consider heading the gelding towards the Newmarket Handicap.

Mr Fashion was having his first start since finishing second on a heavy track in Hobart at the end of July.

With apprentice Jacques Luxe in the saddle, Mr Fashion showed early speed to lead but when pressured midrace the young rider followed instructions from the trainer to the letter by not getting his charge involved in a speed war.

Luxe eased his charge off the pace and when a run along the rails presented turning for home the gelding scooted through to join the leaders and he showed great courage over the concluding stages to hold out is rivals.

Mr Fashion hit the line a short half-head clear of The Son Shines with the luckless Blue Light a close-up third.

“I was a bit nervous tonight because I am hoping he can get a berth in the Newmarket and winning this race was a big step towards staying on track for the Newmarket,” Laskey said.

“There’s no guarantee that he would get a start in that race because it will probably depend on what comes from interstate and how many top rating local horses end up nominating for the race,” he said.