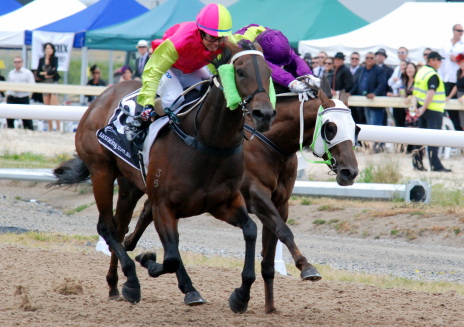 with well-bred mare Lass Of the Manor when she scored a game win in the opening race at Tapeta Park Spreyton today.

Lass Of The Manor had decent form going into the race but was sent out a $7 chance due the weight of money for the favourite Gee Gee Cry Baby.

With New Caledonia-born apprentice Audrey Guillemin aboard, the five-year-old Royal Academy mare settled second behind Gee Gee Cry Baby (Craig Newitt) but when the pair settled down to a two-horse war in the home straight it was Guillemin’s strong riding that ensured her charge had the better of the favourite on the line.

Listen to what trainer Vern Poke and jockey Audrey Guillemin had to say about Las Of The Manor’s win – click here .